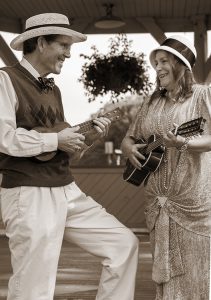 Moonlight Serenade (David and Nancy) is a husband and wife duet out of Kansas City, Missouri. The two feature a large variety of musical styles that are perfect for a reception, small concert and even wedding ceremonies. The ukuleles played together enhance any romantic evening or quiet setting.

The duet is known mostly for their Tin Pan Alley (30's & 40's) repertoire but they can also perform Hawaiian shows, perfect for a luau. They are also versed at country & western and old time rock and roll if the mood hits. 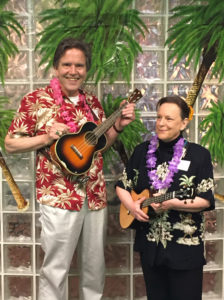 Moonlight Serenade has performed for groups of up to 200 people and even performed for a wedding anniversary when the audience consisted of just two, a husband and wife. (He had promised her Hawaii but settled on a moon lit backyard, pina coladas and island music.)

Nancy has been singing and playing since she was in her teens and has several tours under her belt…bustle. David who was a professional musician for many years also toured internationally with the New Christy Minstrels, The Fleetwoods and Juice Newton plus worked on numerous recording projects which eventually led to a Gold Record and even an Emmy Award. Nancy and David have been performing together for more than 30 years in one form or another but for the last 10 years have made the ukulele their instrument of choice while blending their voices as only people who perform together over time are able to do.